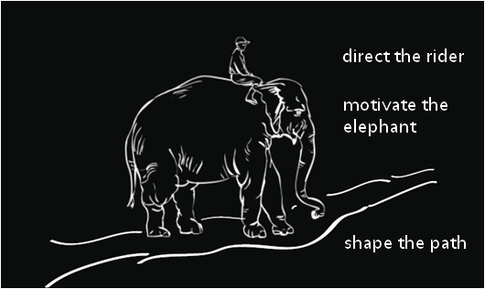 “Perched atop the Elephant, the Rider holds the reins and seems to be the leader.  But the Rider’s control is precarious because the Rider is so small relative to the Elephant.  Anytime the six-ton Elephant and the Rider disagree about which direction to go, the Rider is going to lose.  He’s completely overmatched.”  You need to create a path that makes it easier to be successful.
…
“Most of us are all too familiar with situations in which our Elephant overpowers our Rider.  You’ve experienced this if you’ve ever slept in, overeaten, dialed up your ex at midnight, procrastinated, tried to quit smoking and failed, skipped the gym, gotten angry and said something you regretted, abandoned your Spanish or piano lessons, refused to speak up in a meeting because you were scared, and so on.”